The BTF is part of the DAΦNE accelerator complex: it is composed by a dedicated transfer line, driven by a pulsed magnet, that allows to divert electrons or positrons (normally released to the DAΦNE damping ring) from the end of the high intensity LINAC (Table 1) toward an experimental area.

LINAC provides bunches composed on average of ~10^10 electron/bunch (or 10^9 positron/bunch). Each bunch has a fine structure derived from LINAC modulators that are driven with a ~2.85 [GHz] frequency. The LINAC bunch has up to ~34 microbunches (interbunch time 350[psec]).

The initial part of the transfer line delivers the LINAC beam to a copper converter with selectable radiation lenghts. The outgoing beam acquires a broaden energy spectrum down to few tens of MeV; the population per energy bin is determined mostly by the bremsstrahlung process. The remaining transfer line is composed of different dipoles, quadrupoles, correctors and couples of vertical and horizontal scrapers. These elements act formerly as energy, transverse parameters and multiplicity selectors. It is also possible to deliver directly the LINAC beam into the BTF area. The user can tune run-time the transfer line to cope the experimental needs.

The end of the transfer line is in a 100 m2 experimental hall, where detector calibrations and tests can be carried out. The facility, initially optimized to produce single electron in the 25-750(*) MeV energy range, can now provide beam with different particles in a wider range of intensity, i.e. up to 10^10(*) electrons/pulse [1]. Typical applications are high-energy detector calibration, low energy calorimetry, detector efficiency study, electronic equipment aging measurements, beam diagnostics device tests, etc. 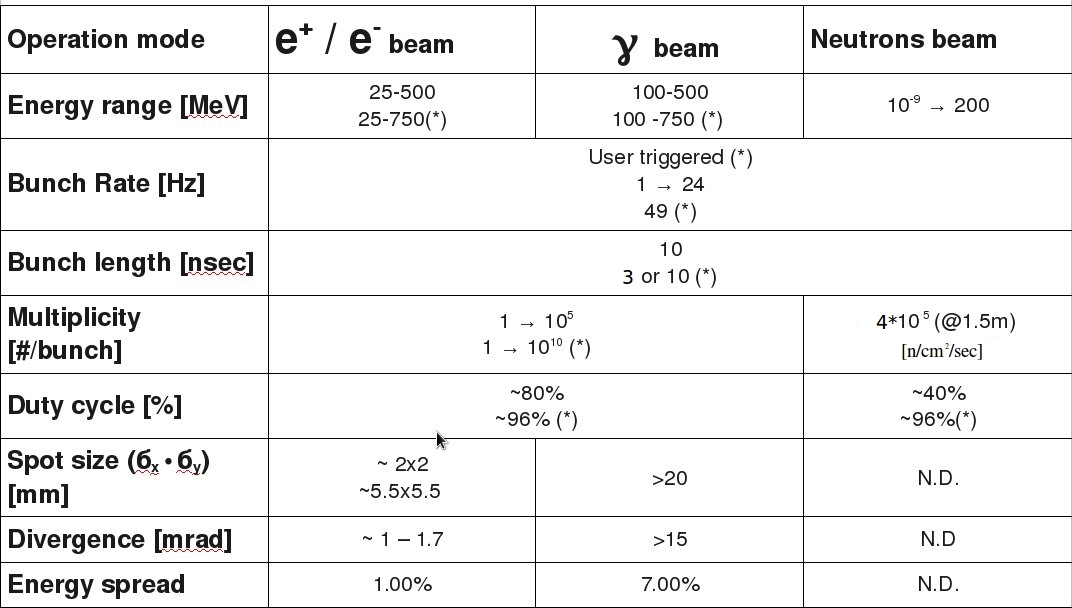 (*) Dedicated time: from single electron mode to high multiplicity (full LINAC beam). These values can be obtained only when the BTF is operated without the DAΦNE main ring topping up. In this condition, the full intensity LINAC, needed for example for neutron production, can be transported and delivered into the BTF experimental hall. This kind of operation must be carefully scheduled with BTF staff.

The facility is operative an average of 250 days per year, day and night time, with users coming from Italy (about 50%) and all over the Europe.


LOW INTENSITY → TIMING
With DAFNE operations: the BTF timing has the following rules:

LOW INTENSITY → MULTIPLICITY TABLE
The BTF bunch rate is defined above, the interaction rate with your detectors is in dependance of the selected multiplicity:
Since the secondary beam multiplicity (particle in the single BTF beam bunch) follows a poissonian distribuition, in the so called "single particle operations" (with an λ poissonian parameter equal to 1) you will have about 36% of empty BTF bunches.
During positron LINAC phase, since the positron primary beam has less current, the λ factor of the secondary BTF beam is about 1/5 of the respective in the electron LINAC phase.